Differences Between Insurance Contracts and Other Types of Contracts 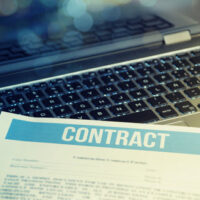 Take it Or Leave It

These are known as adhesion contracts. Because of this, the law requires that insurance contracts be written in plain language, that an ordinary person can understand. In some cases, insurance contracts have been interpreted the way that the insured thinks the policy should be interpreted, even if the language actually says otherwise, if the policy language is not written in a way that the average consumer can understand.

This, of course, won’t mean that a court can or will alter the terms of a contract so long as the insurance contract is written clearly. When it is plain and clear, the contract is interpreted as written, regardless of what is fair.

Interpreting Ambiguities in the Contract

Sometimes, the language in the policy is written clearly, in a way that the everyday person can understand, but the contract is ambiguous.

Perhaps a term is not properly or fully defined. For example, “water damage” “wildlife” “vermin” or “plague” are all terms that often appear in insurance contracts (usually excluding coverage to some extent), but those terms often have differing meanings.

There may be different parts of the contract that contradict each other, leading to confusion. As insurance contracts get larger and longer, this internal contradiction is a common problem in insurance law cases.

As some courts have said, an ambiguity exists when there is more than one reasonable interpretation to the term or provision in the contract.

Insurance companies cannot offer up internal policies to resolve ambiguities. In other words, showing some corporate document that demonstrates what a term was “supposed” to mean, will not be allowed by a court.

If you have a homeowners’ insurance problem, we can help you. Contact the Miami property damage insurance attorneys at Velasquez & Associates P.A. today for help.