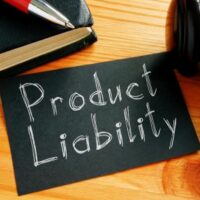 Often when large companies are sued for defective products, the story of the lawsuit illustrates how products and how they are designed can go very wrong. Design defects are where a product works the way it is supposed to-but something in how the product was initially designed, ends up being faulty or dangerous.

A company called Exactech makes and manufactures implants that go into people’s joints when they have joint replacement surgeries. Parts of the implants can degrade when exposed to oxygen (called oxidation), so they are packaged in a way that shields them from oxygen exposure, so that they can last, presumably forever, once implanted in someone’s body.

But a recent class action lawsuit against the company now alleges that the vacuum packed packaging is in fact faulty, thus exposing the implants to oxygen–including after the implant has been put in people’s bodies.

The degradation because of the allegedly faulty packaging can have two very devastating effects on the patient. The implant itself can fail, because vital parts of it are degrading. Additionally, the oxidation and subsequent degradation process can release dangerous chemicals into the body.

Any bones that surround the implants can be affected as well, and they too can degrade. One man in New York alleges that after an implant failed, his femur, tibia, and fibula, all fractured, where he was diagnosed with a massive loss of bone tissue and bone loss.

The surgeon noted massive bone loss from an “unstable tibia,” and part of the man’s leg needed to be amputated. Like many other failed surgeries, the doctors noted deterioration of a polyethylene component of the previously implanted device.

Many patients have now needed follow up and revision surgery because of the degrading implants. Many patients just suffer in extraordinary pain neither they or their doctors being aware that the pain is being caused by the failing implants. Making matters even worse, many of the patients are older, in a very high risk group for any kind of follow up surgery.

The end result is that most patients are in a worse situation, and a worse condition, than they were before the implants.

Implants Go Back Many Years

Exactcech made a number of implantable devices, for varying parts of the body, so if you have had any type of implant, and are having unexplained pain, you should see if your implant was made by Exactech, and discuss the possibility of the product breaking down. The devices have been in use since the early 2000s, and by some estimates, have been put into close to 150,000 patients.

Many of these lawsuits have been filed as class actions, so your attorney can discuss with you whether you are better off with an individual suit, or joining an existing class.

Contact the Miami personal injury attorneys at Velasquez & Associates P.A. today if you have an injury caused by a product.

By Velasquez & Associates | Posted on September 6, 2022
« Can You Make A Homeowners Insurance Claim For Mold?
When Evidence In Your Case Is Just Too Good It Could Be Excluded »