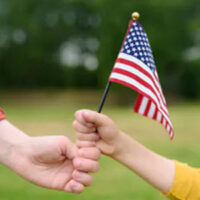 The LGBTQ movement has attained many civil rights, and equality in many areas of the law. But one area where LGBTQ rights may be lagging, is in immigration law, as indicated in a recent case.

The case involved two homosexual men who had a daughter in 2018. They used a process called gestational surrogacy, using an egg from a female donor. The procedure was performed in the United Kingdom.

But when the couple tried to attain citizenship for their child they were denied. The government argued that because the mother—the unknown egg donor—was a UK citizen, and because both parents were not American Citizens, and as the child was not born in America, citizenship was properly denied. In essence, the United States argued that the child was more like a child born out of wedlock, or a child born in a foreign country to a mother where the father was unknown.

The fathers took the US to court, in order to attain citizenship for their child. They argued that although the law requires both “biological parents” to be citizens of the United States, limiting that definition to the biological mother and father violated their equal protection rights—they argued that such a strict definition must automatically illegally exclude gay couples from receiving the same treatment as straight couples in the same situation.

The Court agreed, clarifying that under the law, the child had been entitled to be declared a citizen. The court said that a strict reading of “biological parents” would necessarily, and illegally, exclude homosexual couples. So long as the parents here were U.S. citizens, as they were, the child would receive the same benefit of citizenship as the child would if he or she was born to a heterosexual couple overseas.

The government actually did issue the child a green card, providing the child a path to citizenship. But that was not enough; the court said that the child had a constitutional right to be declared a citizenship, in order for the court to have rights equal to those of heterosexual couples.

At the time, the Court probably didn’t consider immigration issues, but surely, one material benefit of being a heterosexual couple, is the ability to have a child overseas and have the child be a citizen–the same rights this gay couple successfully fought to attain.

Contact the Miami immigration attorneys at Velasquez & Associates P.A. today for help if you have immigration problems.

By Velasquez & Associates | Posted on December 29, 2020
« Do Police Need a Warrant Before Obtaining Your DNA?
You Can Fight Against a Foreclosure Deficiency Judgment »