Sinkholes: The Forgotten Danger to Property 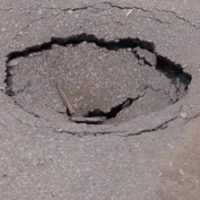 Florida is home to a myriad of natural disasters which can cause catastrophic losses to property, homes and businesses. One such potential cause of damage are sinkholes. We tend to think of sinkholes as enormous, gaping holes that open up and swallow entire houses or roadways. But even small, slight sinkholes, that are not big enough for anything to fall into, can still upset the foundation of a home enough to cause serious damage.

Sinkholes occur as a result of the rock that is under your property and its interaction with water or moisture. Some kinds of rock (especially rock found in Florida) are very porous, allowing them to hold water and moisture. That moisture tends to dissolve the rock. Just think of a river or canyon that has been naturally formed in the rock by water runoff on the side of a mountain.

When the rock underneath dissolves, it becomes too weak to hold the weight above it, and you end up with a sinkhole.

Because of the interaction between water and certain kinds of rock, water based events tend to make the risk of sinkholes worse. Heavy rain and tropical storms—both Florida staples—can increase the risk of a sinkhole.

The only time when your standard homeowners’ insurance policy will cover sinkholes if you have not purchased a separate sinkhole policy is if the sinkhole is visible, the structure of your home is damaged, and a government agency condemns the property. As you can tell, this is coverage for only the most catastrophic of sinkholes. But you do not need to meet these requirements if you have purchased a separate sinkhole policy.

How to Spot Potential Sinkhole Damage

There is a 2-year time limit to file sinkhole claims, although your policy may have a shorter time period, and they often do. That means that if you suspect sinkhole damage, you should act immediately.

If you don’t have a massive structural collapse or a gaping hole in your bedroom, you may wonder how would you even know whether you have damage as a result of sinkholes? Unexplained structural cracks in walls and floors are a telltale sign. Flooring that bubbles, pops up, or separates, can be an indication.

Doors or windows that do not close properly can also be an indication of sinkhole damage. Any water intrusion, even minor (such as discoloration), can indicate a sinkhole, especially with no other evidence of a leak.

Outside, if property has formed new ponds or small puddles, or trees or fences tend to slump or seem misaligned, a sinkhole could be to blame.

If you have damage to your property no matter what the cause, get protection and get your questions answered early in the claims process. Contact the Miami property damage insurance attorneys at Velasquez & Associates P.A. today for help.

By Velasquez & Associates | Posted on September 8, 2020
« What is Homeowners’ Liability Insurance?
Distracted Driving is More Dangerous Than You Think »