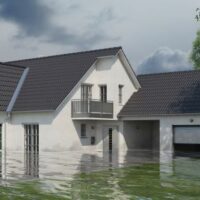 There is a perception that flood insurance is largely for the rich. After all, it is the rich who can afford luxurious homes right off the water, so why not make them pay their fair share of insurance if they want to live that lifestyle, right? Well, this may be a misconception, and the idea of rising flood insurance is actually unfair to everyone, regardless of income.

The United States maintains a National Flood Insurance Program (NFIP), which is the government insurance program that pays damages in the event of a flood related loss. This is used by many residents whose homes are located in a flood zone, or in coastal areas.

The program, like most insurance, bases premiums on risk. But many feel that people living on the coasts, where flooding is a much higher risk, often pay too little. This is one reason, the logic goes, why the federal flood insurance program is billions of dollars in debt.

The Federal Emergency Management Agency (FEMA) now is re-evaluating how it calculates risk, and thus, millions of people may see floor premiums adjusted. Although some homeowners may find flood premiums going down, for most, the end result will be higher premiums.

However, there is concern that with a re-evaluation of risk, will come a rise in premiums that is so high, many Americans may not be able to afford to remain in their homes.

Worse, the people who won’t be able to afford these increases aren’t beachfront tech moguls making billions of dollars. A federal government study from 2007 estimates that about 80% of federal flood policies are for homes that are worth under $500,000. In fact, data shows that nationally, people living in flood zones have lower incomes than those living outside of flood zones.

If people can’t pay flood premiums, they will be forced to move. That means that people who can afford the increased premiums, will be able to take those areas over, leaving waterfront areas the exclusive areas of the rich.

Not Much of a Choice

Do people who live in flood areas deserve to pay more because they chose to live on or near water? Not necessarily.

Many flood areas are inland, and not in expensive waterfront areas. Many homeowners are surprised to see their property, which may be a mile or more inland, is designated as a flood risk. Sea level rise has also made once flood-free zones into flood risk areas.

Remember that your typical Florida homeowners insurance does not automatically include flood insurance. Flood insurance is a separate policy. Whether you need to get it or not (sometimes it is required by mortgage companies, if you are in a flood zone), it is always a good idea—just don’t assume that your homeowner’s policy includes it.

Contact the Miami property damage insurance attorneys at Velasquez & Associates P.A. today for help if you have a problem with your homeowners or business insurance claims.

By Velasquez & Associates | Posted on November 16, 2021
« Proposed New Law Could Make Roof Replacement Even More Difficult
The Law Of Rear End Accidents – Presumptions And What They Mean »