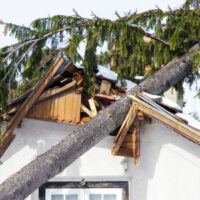 It’s bad enough that many insurance policies don’t cover flooding, but rather, that a separate policy has to be purchased to cover damage because of floods. It’s bad enough that sinkhole coverage doesn’t have to legally be included in insurance policies, but rather, sinkhole coverage must be purchased separately (and some insurers may even refuse to sell that). Now, Florida lawmakers are trying to take away coverage for your roof.

Since a replacement roof is obviously newer, it would obviously be more expensive than the value of the roof that was destroyed. The end net result for homeowners would be that they would lack coverage for their roofs should a storm happen because the value of any new roof that needed to be installed would be depreciated 10 years worth of value. And that practically means that should a storm come through, there would be no insurance for expensive roof repairs.

Insurance companies are already raising rates. Some estimates have insurance costs rising 30% or more. Insurance companies say that’s because of claims coming from prior hurricanes in 2017-2018. They also blame homeowners and public adjusters, for inflating the cost of claims.

By some estimates, the new law would let insurance companies get away with paying a quarter of what the value of a new roof actually is. All this without any guarantee that such a change would actually ever alter the cost of homeowners insurance.

Other Parts of the Bill Hurt Consumers

The bill has other proposed anti-consumer provisions. For example, the law would require that homeowners provide 60 days notice before filing a lawsuit—a severe hardship for homeowners who have emergency damage to their property that needs fixing right now. The law also would reduce from three to two years, the time period in which homeowners can file claims for losses.

The bill also seeks to reduce contingency fee multipliers, which can be an incentive for attorneys to take homeowner insurance cases, thus providing access to courts for consumers who need attorneys to fight unscrupulous insurance companies.

The insurance industry is pretending that this bill is pro-consumer, under the guise that it will reduce premiums. But in actuality, there is little about it that is designed to help homeowners, and no requirement that any savings that homeowners insurance companies may realize need to be passed on to consumers.

Contact the Miami property damage insurance lawyers at Velasquez & Associates P.A. today for help with your homeowners insurance claim or after any damage to your property that requires insurance to get involved.