Should You Worry About Second Liens Foreclosing? 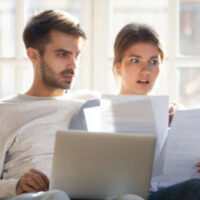 But what about second loans? Back when loans were easy to come by, and when equity in property was going through the roof, many people took out second loans on property. And when the economy tanked in 2008, and property values plummeted, many people found they were unable to pay those loans.

A lot of people make the mistake of believing that second loans cannot or will not foreclose when they are not paid. But in truth, they can and do, and homeowners should know about how second loans work before taking these loans out.

How Second Liens Get Paid in Foreclosure

Liens generally are ordered based on when they were taken out (borrowed). It’s better to be higher in order (or, to have priority), because a lower lien cannot foreclose on the interest of a higher lien. That means that if you do not pay your second loan, and the second loan forecloses, the first lien is not wiped out. Rather, the first lien would be paid first, from the proceeds of the foreclosure.

So why would a second lienholder ever foreclose, in cases where the value of the property is not enough to cover the first and second loan? They often do not for this very reason. However, the second loan holder can still go after the homeowner, personally, for the amount of the loan. In other words, even if the property sells at foreclosure, and only the first lienholder gets paid, the second lien can still pursue the homeowner, personally, to make up when it was not paid.

This amount is called a deficiency judgment, and it can be pursued, and collected on, just like any other kind of debt. Because home loans are often much greater than your average credit card or medical debt, many times these deficiency judgments end up putting homeowners into bankruptcy.

The good news is that sometimes a good foreclosure defense attorney can negotiate with the second lienholder when foreclosure is imminent, to work out a solution that doesn’t entail the homeowner having to pay money out of pocket if the property is not worth enough to pay off all lienholders.

By Velasquez & Associates | Posted on October 5, 2020
« Was Your Property Damaged by Construction-Related Vibration Damage?
What is Reinstatement and How Bank Errors Can Keep Homeowners in Foreclosure »