Watch Out – Construction Sites Can Be Dangerous 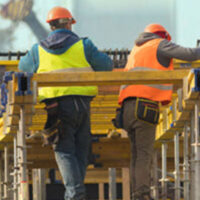 Construction sites can be very dangerous places, not just for workers, but for others passing by, or for those on the property doing business, inspecting, or doing other work, even if that work is unrelated to the actual construction.

Every construction site is different, but there are some commonalities between them that make all of them inherently dangerous in some way.

For example, a lot of construction sites use scaffolding. Scaffolding presents two dangers—one to the workers actually on the scaffold, but also to passers by, as scaffolding is often constructed over or around pedestrian walking areas.

Scaffolding can be very dangerous, as a narrow platform, and one that many construction workers will also lay tools or supplies on. The height of scaffolding also makes them dangerous for everyone involved. Much scaffolding is tiered; that is, there will be one scaffold constructed over another. That means that when someone or something falls off of a scaffold, it can knock someone or someone off the scaffold underneath, and there can be a “snowball” or “domino” effect.

Cave-ins are also particularly dangerous, and like scaffold injuries can affect and injure innocent bystanders. Remember that cave-ins happen anytime a hole is being dug into the ground, and most modern buildings go underground to some extent, even just for construction of plumbing or infrastructure.

When there is a cave in, air supply can be short, and the victims may only have limited time to survive—however, rescue can take time; rescuers often have to support the area and make sure that rescue efforts don’t cause a greater cave in.

Trench collapses are also very common and similar to cave-ins. Because many trenches are built from earth, cave ins can cause immediate crushing injuries or suffocation. Like a cave-in, rescue workers need to be careful not to cause an even greater cave-in, when trying to rescue survivors.

Just as they are in our homes, ladder accidents on construction sites can cause serious injuries. Yes, often the injuries are a result of worker misuse. But they can also be the result of the construction site not having proper ladders, not providing proper training, or because of the failure (product defect) of the ladder itself.

Construction sites may have loose or ungrounded wiring that can lead to electrocution. Even bystanders who step on or interact with exposed wiring can be grievously injured. Even when it doesn’t result in death, electrocution can cause severe burns, brain damage, or loss of function to vital systems in the body.

OSHA does have stringent requirements when it comes to worksite safety when doing electrical work, however, much of the signage may be misunderstood or ignored by passers by, who are not in the construction industry and who may not understand the dangers the signage is trying to warn them about.

Contact the Miami personal injury attorneys at Velasquez & Associates P.A. if you have been injured on a construction site, or by anything related to construction activity.

By Velasquez & Associates | Posted on December 19, 2022
« Maintain Your Home Or Risk Having Your Claim Denied
3M Lawsuit Shows Faulty Instructions Can Lead To Liability Claims »